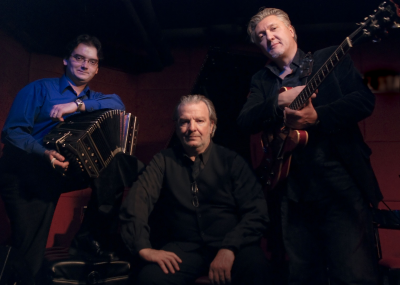 Grammy winner, Emmy winner, and Emmy nominated film composer Claudio Ragazzi has been writing award winning music for film and television, scoring dozens of projects and performing with some of today's most respected musicians at renowned concert halls in the world. He scored the MIRAMAX Film “Next Stop Wonderland”, the award winning Goldheart Productions “The Blue Diner”, John Sayle's “Casa de los Babys” in collaboration with Mason Daring, and Francis Ford Coppola’s “Tetro” in collaboration with Osvaldo Golijov. Claudio's music can also be heard in “Something's Gotta Give” starring Jack Nicholson, Diane Keaton and Keanu Reeves.

Argentinean bandoneonist Hector Del Curto’s career has encompassed the traditional Tango, New Tango, Jazz, Classical and World music. As a most sought-after banoneonist, he has performed with luminaries across many musical genres including Joe Lovano and Regina Carter. He has appeared with prestigious orchestras such as Metropolitan Opera, St. Louis Symphony, National Symphony, Orpheus Chamber and more.

Join Our Community / Welcome Back!

One moment, you will be redirected shortly.

Welcome to All About Jazz!

We sent a confirmation message to . Look for it, then click the link to activate your account. If you don’t see the email in your inbox, check your spam, bulk or promotions folder.
Thanks for joining the All About Jazz community!

Search Jazz Near You


or search site with Google

View events in other cities

All U.S. Cities All World Cities

All About Jazz musician pages are maintained by musicians, publicists and trusted members like you. Interested? Tell us why you would like to improve the musician page.